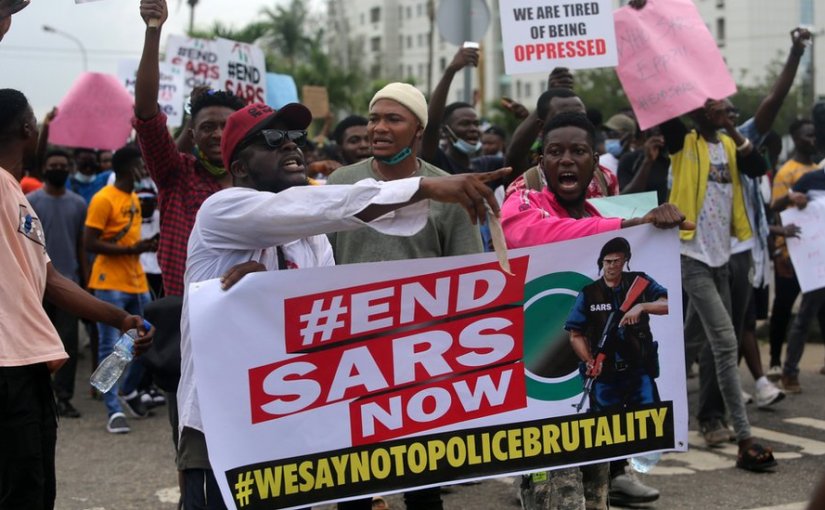 Scrapping SARS is Nothing Short Of Bottling Old Wine With New Bottle: How Best To Reform NPF & Its Units
(Onitsha, Eastern Nigeria, Monday, 12th Oct 2020): The Int’l Society for Civil Liberties & Rule of Law is writing to totally reject the scrapping, yesterday, Sunday, 11th October, 2020 of the notorious and butchery Special Anti Robbery Squad of the Nigeria Police Force and planned absorbing of its killer personnel into various units or departments of the Force. As organization with individual and corporate expertise in modern policing and legal matters, Intersociety sees the announcement by your public office as nothing short of ‘bottling old wine with new bottle’. There must be thorough plus ICT and mentally driven or sharpened reformation of the Nigeria Police Force and its relevant units or departments.
The reformation of the Nigeria Police Force and all its intelligence, operation, investigation, custodial and prosecution units or departments must be done holistically and comprehensively. That is to say that the reforms must particularly be centered on the following relevant or key units or departments of the NPF: anti-fraudsection, special anti-robbery squad-State-SARS and F/SARS (“disbanded”), x-squad (in-service anti-corruptionsquad), general investigation, special fraudunit, legal section, forensic science laboratory, Interpol liaison, homicide, cybercrime section, anti-human trafficking, force intelligence department or FCIB/SCIB, special branch (criminal and special investigation bureau), Central Crime Registry, department of criminal investigations or FCID/SCID and its annexes in Kaduna, Lagos, Enugu and Gombe; counter terrorism section, anti kidnapping squad, police border, police highway, police mobile, police railway and police marine sections.
(a) The reforms must be operationalized as operational guidelines, code of conduct and training manuals or school curricula in the NPF’s top Departments of FCID/SCID, FCIB/SCIB, Information and Communications Technology, Research & Planning, Training & Development and Operations; headed by DIGs as well as related units or departments in the Force’s 17 Zonal Commands, 36 State Commands/FCT and Areas Commands, Divisional Commands and Training Commands, Squadrons and other related formations across the country. The training and operationalization must start with the heads of such units and departments including ‘in-service’ and ‘out-service’ trainings and orientations.
(b) There shall be scrapped with uttermost immediacy the following unnecessarily created and duplicated IGP’s “special intervention squads” such as “IGP’s intelligence response team” (IRT), “IGP’s special tactical squad” (STS), “IGP’s monitoring team” and related others. Apart from their sheer duplicity, they also seriously undermine the activities of the duly units or departments above mentioned.
(c) In your public office’s recent creation of five additional Zonal Commands, Awka was named as the headquarters of Zone 13, but ‘Ukpo-Dunukofia’ unceremoniously became its final location. We want it reversed and reverted to Awka.
(d) Resuscitate & Digitalize NPF Forensic Dept: there must be revitalization and digitalization of the NPF Forensic Department which must include criminalistics, pathology, toxicology, physical anthropology, odontology, psychiatry, questioned documents, ballistics, tool work comparison and serology, etc.
(e) There must be ICT policing revolution and impartation of logical analytical skills in the NPF and all its headship and operational or field personnel to curb the incessancy of torture and extrajudicial killings and others forms of crude and unprofessional policing. This must include ICT compliant guidelines for processing or handling of suspects arrested and investigated by the headship and operational or field personnel manning all the named NPF units or departments.
(f) Tackle & Abolish Endemic Corruption In The NPF: corruption to be tackled and abolished in the Force include commercialization of criminal investigation (i.e. custodial bail fees and funding by complainants, of criminal investigation including arrests and prosecutions), beat patrol and roadblock extortion and daily criminal returns made to senior police officers (i.e. from SARS/MOPOL commanders/DPOs-Area Commanders-CPs-AIGs-DIGs-IGP), diversion of overhead funds meant for police formations by the NPF Force Headquarters and State Commands and privatization of policing formations and officers’ promotions and postings. Police corruption also involves dabbling into and criminalization of civil matters, confiscation and forceful possession of monetary cash sums and properties belonging to suspects or “proceeds of crimes” and ritualism (by “disbanded” SARS personnel and their likes).
(g) Checkmate & End Operational & Custodial Killings: These must be done away with through digitalization of the NPF’s intelligence gathering, suspects’ arrests and detention, investigation and trial as well as abolition of trumped allegations and charges.
(h) Say No To ‘Holden Charge’, Archaic Laws & Practices: Citizens’ arrests, detention, investigation and trial must all times be in full compliance with the provisions of Sections 33, 34 and 35 (4) of the country’s 1999 Constitution and related others in the country’s int’l rights treaty laws. All forms of ‘Holden Charge’ or ‘Prosecutorial Vindictiveness’ and archaic jurisdictional practices must be abolished.
(i) There Must Be Specialization Of Trial Courts: There must be carried out urgently and legislatively or administratively in Nigeria the carving out of ‘Criminal High Courts’ and ‘Civil High Courts’. This is for purpose of ensuring speedy and ICT accelerated trial or fair justice dispensation.
(j) End Hate & Racial Policing: There must end to discriminatory, sectional, hate and racial policing in the country. Racial profiling must give way for plural or balanced, secular and meritorious policing.
Signed:
For: Int’l Society for Civil Liberties & Rule of Law
Emeka Umeagbalasi, Board Chair, Chinwe Umeche, Esq., Head, Democracy & Good Governance, Obianuju Igboeli, Esq., Head, Civil Liberties & Rule of Law and Amaka Damaris Onuoha, Esq., Head, Campaign & Publicity
Mobile/WhatsApp: +2348174090052
Email: info@intersociety-ng.org, Website: www.intersociety-ng.org