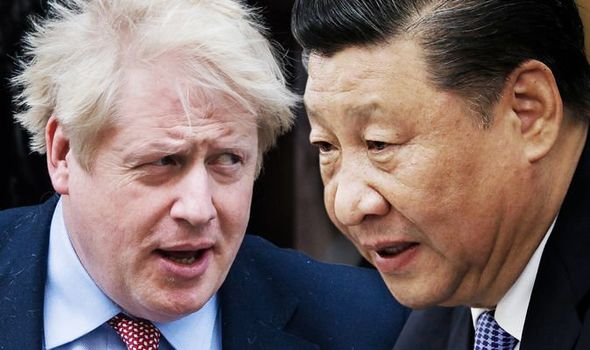 BORIS JOHNSON should pursue China for a coronavirus compensation package worth £351billion, according to a leading report into the global health crisis.

EDUCATIVE : IPOB The Powerful Force Needed To Enforce Good Governance In Igbo Land — Eze Nnanyereugo
EDUCATIVE | Why Do You Think That The Study Of History Is Important Today In Nigeria
Ancient Truth Decoded | Man Created God In His Image — Debate Us

An investigation by the Henry Jackson Society has concluded China could have mitigated the worldwide economic impact of COVID-19 and indicated there is evidence the Chinese Government breached international healthcare responsibilities. The British foreign policy think-tank estimates the spread of coronavirus, which has infected more than one million people globally, has cost the G7 group of nations including the UK, US and Japan a huge £3.2 trillion.

The report, which is published tomorrow and has been seen by the Mail on Sunday, outlined a number of possible legal avenues including going to the UN (United Nations) and International Court of Justice.

“Now China has responded by deploying an advanced and sophisticated disinformation campaign to convince the world that it is not to blame for the crisis, and that instead the world should be grateful for all that China is doing.

“The truth is that China is responsible for COVID-19 – and if legal claims were brought against Beijing they could amount to trillions of pounds.”

Following the report, which will be published in its entirety on Monday, up to 15 Conservative MPs are understood to have signed a letter calling for the Government to “re-think” its relationship with China.

It appears likely that in its early response to the outbreak, the uphold its obligations.

“This omission allowed the disease to spread throughout the world with extraordinarily serious consequences in terms of global health and the economy.

“The cost to the UK may be, as a Henry Jackson Society report now suggests, over £350 billion.”

Over time, we have allowed ourselves to grow dependent on China and have failed to take a strategic view of Britain’s long-term economic, technical and security needs.”

The Chinese Embassy has declined to comment on the reports.

In the UK a total of 4,313 people have died after being diagnosed with coronavirus.

The Department for Health confirmed the number of people who died from COVID-19 increased by 708 on Saturday – including a 5-year-old child.

Neil Ferguson, a professor at Imperial College in London, who helped to shape coronavirus policy following a damning report into the Governments initial strategy, has said the number of deaths could rise above 20,000.

Professor Ferguson told the BBC: “We had an exponentially growing curve of infections which we interrupted at a certain time.

“We don’t have the ability right now to measure how many people have been infected, that will come with antibody tests, and so we are making statistical estimates of that and those are subject to a certain degree of uncertainty.