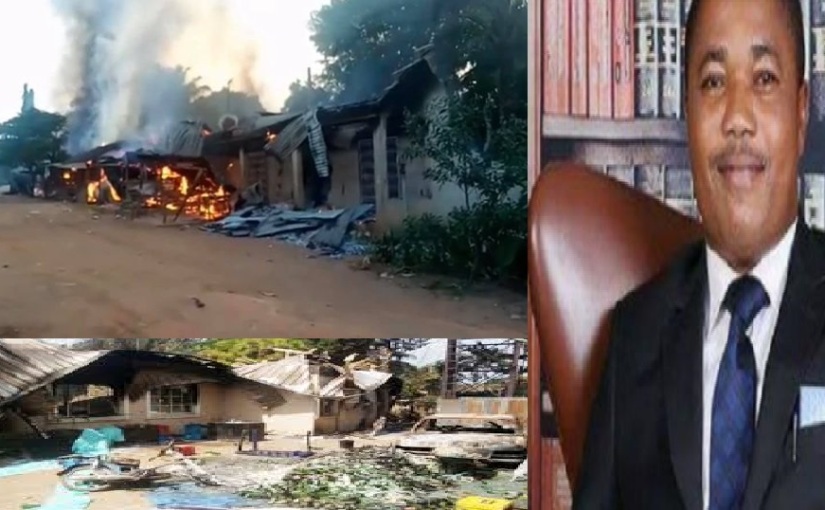 Onitsha, Eastern Nigeria, 28th Jan 2020-The Int’l Society for Civil Liberties & Rule of Law-INTERSOCIETY has strongly rejected the Federal Government (OSGF) written excuses over the Oraifite (Anambra) Police and Army Mayhem of 2nd Dec 2019 and insisted on setting up by same of an independent and impartial or credible Joint Investigation Board.

The above was contained in our reply to the Secretary to the Government of the Federation-SGF, Barr Boss Gidahyelda Mustapha. The reply, referenced: INTERSOC/002/01/20/OSGF, was dated yesterday, 27th Jan 2020 and communicated to the recipient same yesterday and has since been received and acknowledged.

The OSGF reply to Intersociety, dated 20th Jan 2020, with communication or reference No. 56331/S.4/525; followed our earlier letter to Nigerian Government through same OSGF, dated 16th Dec 2029 and referenced: INTERSOC:001/12/19/OSGF/ABJ/NG. The OSGF reply was communicated to us through its Legal Unit/Legal Officer, Emmanuel E. Akissa, Esq.

Intersociety had in its second letter appreciated the OSGF’s non-denial of the fact that ‘our letter was appropriately and properly channeled or rooted’. In other words, the OSGF is the most appropriate body or authority to handle the subject matter or intervene in same. The OSGF had in its letter claimed that “it cannot act or set up a Joint Investigation Board as demanded by Intersociety because of the pendency of a fundamental human rights suit filed by the Chief Victim (Barr Ifeanyi Ejiofor) in which the OSGF was not joined as a party”.

However, we strongly rejected the OSGF’s excuses particularly to the effect that “all the judicial remedies available before relevant Courts shall be exhausted by us since our case is still pending in Court”. The OSGF had in his reply added that “our letter to his office was well received and has been carefully evaluated”.

In other words, the OSGF is telling us that it shall not carry out its constitutional and statutory functions and duties in the instant case because ‘a fundamental rights suit filed by the Chief Victim, Barr Ifeanyi Ejiofor (not Intersociety) for purpose of preventing further police and army mayhem including attacks on his person and properties is pending in Court’.

Intersociety further maintained that the OSGF’s reference to the matter as ‘ours’ is wrong and strongly condemned and it was made it clear to SGF that we are Int’l Society for Civil Liberties & Rule of Law-INTERSOCIETY and not Barr Ifeanyi Ejiofor/I.C. Ejiofor Law Firm-and that we independently investigated the mayhem and findings made led to our letter to the OSGF, dated 16th Dec 2019. Our intervention, investigation and letter were all done as ‘Public Interest Matter’ and must be treated so.

We also pointed out that: (a) we did not file the said suit in Court and were not a party in same, (b) from our enquiry, the OSGF is also not joined as a party in the suit, and (c) there is no court order either from the referenced fundamental rights suit or any other restraining the OSGF from performing its functions in the matter including setting up a Joint Investigation Board as demanded.

Further, our writing to the OSGF was well informed and most appropriate thing to do in the instant case. This is because the Nigeria Police Force cannot morally; correctly and competently investigate the same mayhem it was strongly and widely accused of masterminding, coordinating and perpetrating in complicity with the Nigerian Army and some troublesome and riotous billionaires.

Intersociety, therefore, sees the excuses by the OSGF as ‘escapist’ and its fall back on ‘pendency of the matter in Court’ very despicable and condemnable. It is also nothing short of promotion of a culture of impunity and repeat-offense. It must be generally pointed out that under the extant laws of the country, no court can stop the OSGF from constituting and superintending such Joint Investigation Board and the investigation proper.

We hereby call on the OSGF to rescind its decision, reverse and rewind same and do the needful as strongly demanded in the said letter of 16th Dec 2019. Again, it is our strong demand that A Joint Investigation Board Be Set Up By The OSGF Into The Oraifite-Anambra Police & Military Mayhem Of 2nd Dec 2019

One thought on “Oraifite Police And Army Mayhem : Intersociety Exchange Letter With SGF Insist On Joint Investigation Board”