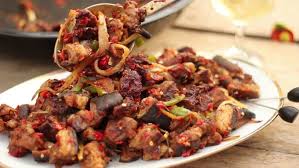 There are reports of many people (especially food vendors) using paracetamol to cook meat. Their reason for this is to quickly tenderize the meat and avoid long boiling times.

However, putting paracetamol into food has very serious health implications. When the drug is used for cooking, it is hydrolyzed (broken down) into 4-aminophenol, which is highly toxic to the kidney. Also, high consumption of analgesics over many years is a well-known cause of kidney damage.

Toughness of meat comes from the collagen (the connective tissues). During cooking it slowly breaks down into a substance called gelatin, and the meat becomes soft.

Without using paracetamol, you can tenderize meat by:
1. Cooking with a pressure cooker.
2. Brining (salting). This involves soaking the meat in a highly concentrated salt-water solution, typically for about 20 hours, before cooking.
3. Slicing the meat. This helps to sever muscle fibres and thereby hastens softening while cooking.
4. Pounding meat (e.g. with a mallet) before cooking.
5. Marinating (soaking) with acid in the form of vinegar, citrus juices or wine before cooking.
6. Marinating with enzymes. Pineapple, kiwi, ginger, Asian pear and pawpaw contain enzymes that can help tenderize meat.
7. Velveting the meat. This involves coating/soaking pieces of meat in a mixture of cornstarch, rice wine, salt, sugar, egg whites, and sometimes soy sauce, for about 30-45 minutes before cooking.
8. Slow-cooking the meat.
9. Using commercial meat tenderizers, which are sold in powder or liquid form. They should only be used sparingly, to avoid the meat becoming unpleasantly soft.

If you know anybody that uses paracetamol for softening meat, please advise them to desist forthwith!

This is an original article, published here for the first time.