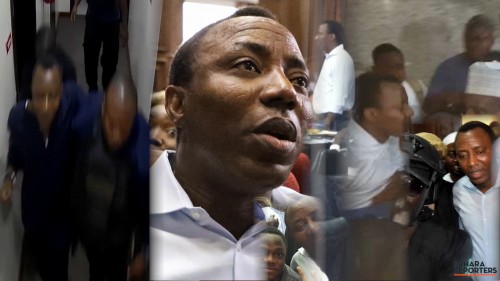 When Mr. Omoyele Sowore was arrested on August 2, 2019 the State Security Service (SSS) accused him of engaging in terrorist activities. On the basis of the allegation the SSS obtained an order from the Honourable Justice Taiwo Taiwo of the Federal High Court to detain Sowore for 45 days in order to investigate his alleged terrorist activities. But at the end of the investigation he was not linked with terrorism in any material particular. Hence, he was not charged with any offence under the Terrorism Prevention Act, 2011, (as amended).

Even though the allegations of terrorism and treasonable felony against Sowore had collapsed like a pack of cards the Attorney-General of the Federation, Mr. Abubakar Malami SAN engaged in a face saving measure by charging him and Olawale Bakare with treasonable felony for planning to organise public protests against the Buhari administration. Not sure that the charge of treasonable felony would succeed in the court the AGF proceeded to charge Sowore with cyber stalking for allegedly insulting President Buhari in a television interview and money laundering.

Meanwhile, the organisers of the public protests which were held in Lagos, Ogun, Ondo, Cross River and Osun states were charged with unlawful assembly. The case filed in Ogun state has been dismissed while the defendants have been discharged following the no case submission of the defence counsel, Mr. Effiong Inibehe. The defendants in the other cases have been granted bail pending trial by the various Magistrate Courts. Having met the bail conditions they have regained their freedom.

But the orders of Justice Taiwo and Justice Ojukwu for the release of Sowore and Bakare were ignored with impunity by the SSS. Although the SSS complied with the court order for the release of Sowore and Bakare within 24 hours’ ultimatum its operatives turned round to manhandle Sowore in the well of the court and later rearested him without any warrant of arrest. However, because of the gravity of the charge pending at the Federal High Court, the Presiding Judge, the Honourable Justice Ijeoma Ojukwu had ordered the Prosecutor to make available to the defendants the statements of all prosecution witnesses while the case was fixed for definite hearing on the 5th and 6th, December, 2019.

But on account of the refusal of the SSS to comply with the order of Justice Ojukwu for the release of Sowore and Bakare on bail the defendants were unable to prepare their case. As the SSS refused to comply with the order of court to produce the statements of the prosecution witnesses the case has been further adjourned to February 20, 2020 at the instance of the Prosecution Counsel. For wasting the precious time of the trial court the Prosecutor was ordered to pay N100,000 costs to the defendants in accordance with section 296 of the Administration of Criminal Justice Act, 2015. The Prosecutor has since paid the said costs.

It is therefore embarrassing that the federal government which has found it difficult to prove its case in a competent court of law has resorted to the media trial of Sowore. Thus, in a press statement held on Sunday, December 8. 2019, a presidential spokesperson, Mr. Garba Shehu claimed that “Sowore called for a revolution to overthrow the democratically elected government of Nigeria.” In comparing Sowore with the Boko Haram sect the Presidency said, “Nigeria is already dealing with an insurgency that has left millions of people displaced and desperate in the north-east region of country. The Boko Haram militants, who are behind the violence, also fancy themselves to be fighting for some sort of revolution.” The link is a justification for the planned arraignment of Sowore for terrorism.

Since it is common knowledge that Sowore and Bakare are not among the well known merchants of violence and coup plotters that had successfully but illegally removed democratically elected governments in Nigeria we are not going to join issues with Mr. Garba Shehu over the highly contemptuous statements credited to him. But as a senior journalist Mr Shehu ought to have known that it is highly unprofessional to subject a man who is held incommunicado to scurrilous attacks in the media. We are however convinced that Sowore will have a right of reply once the fundamental rights of the Nigerian people are restored.

Even though the federal government has failed to engage in the diligent prosecution of the serious case the Presidency has resorted to media trial while the charge of treasonable felony is allowed to hang menacingly on the heads of our clients. We are however not going to be tempted to join issues with the Presidency over a case that is pending before a properly constituted court of law. If the Presidency is so sure that our clients committed treasonable felony or any other offence whatsoever it should keep its powder dry and advise the Prosecution to commence the trial without any further delay.