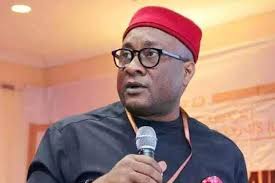 When the news broke over the weekend that Allen Onyema had been indicted in the United States for multi-million dollar fraud, a question that echoed amongst Nigerians was how he moved from relative obscurity to become one of the biggest players in Nigeria’s aviation sector in just about half a decade.

Some commentators said the indictment buttressed their suspicion that Mr Onyema might be a fraudster like many Nigerian businessmen with unexplained wealth; while others rehashed old claims that he has been fronting for unscrupulous politicians who cornered public funds and invested the same through him.

Mr Onyema established Air Peace Limited in 2013, and by the end of 2018, it had gained the largest share in Nigeria’s domestic air travel, according to the Nigerian Civil Aviation Authority (NCAA).

The airline also recorded tremendous breakthrough in foreign travels, flying to more countries in Asia, Europe and Africa than any other Nigerian commercial flights operator.

Earlier this year, the company announced it was expanding both its fleet and destinations, which would include Atlanta and Houston, and effectively asserted its place as a blue-chip entity in the Nigerian aviation industry.

But all that came raised more suspicion with the allegation Friday that the man behind the thriving airline had been involved in multiple layers of sharp practices spanning several years in the United States.

The U.S. Department of Justice said Mr Onyema was indicted by a grand jury on several counts of criminal charges bordering on identity theft, bank fraud and money laundering. Facing the charges alongside him is Ejiroghene Eghagha, Air Peace’s head of finance and administration.

The full indictment narrated how Mr Onyema, aided by his alleged accomplice Ms Eghagha, allegedly raised several letters of credit to buy the same planes he had already purchased and added to Air Peace’s fleet of commercial airliners in Nigeria.

Based on the dubious letters of credit, American banking giant Wells Fargo transferred more than $21 million to bank accounts of U.S.-based Springfield Aviation, a suspected shell company registered and controlled by Mr Onyema. Wells Fargo paid the money to Mr Onyema in a series of transactions between February 10, 2017 and February 20, 2018, court documents said.

Within hours after the indictment was made public, Mr Onyema released a statement pushing back strongly against the charges. He said he would vigorously defend his honour in court, but did not indicate whether or not he would be heading to the United States soon.

Based on the charges, American prosecutors have secured court warrants for the arrest of Messrs Onyema and Eghagha in the United States. Corresponding warrants have also been issued for Canadian authorities to detain both suspects should either or both of them be found there.

Although a large section of Nigerian social media already expressed doubts about the veracity of American charges against Mr Onyema even before his rebuttal Saturday morning, many others withheld their support for the businessman because they felt the source of his wealth, especially how he acquired Air Peace, had been shrouded in secrecy.

“It is only in Nigeria that someone can become a billionaire overnight and you cannot unravel how he accumulated his wealth no matter how deep you dig,” business analyst, Osahon Ojigbede, told PREMIUM TIMES. “It is one of the reasons I have been very reluctant to go with those who say we should give Mr Onyema the benefit of the doubt.”

Mr Ojigbede said he was particularly gripped by a section of the indictment which said Mr Onyema established several non-profit organisations to move funds around in a manner typical of money laundering.

“Since he has said he would clear his name in court, I look forward to seeing how he plans to address charges of drafting fake purchase documents and using proceeds of non-profits to directly fund commercial businesses,” Mr Ojigbede said.

PREMIUM TIMES reached out repeatedly to Mr Onyema in the wake of the allegations, but he has yet to agree to be interviewed.

However, he briefly addressed how he raised funds to start Air Peace in an April 2017 interview with City People, an entertainment weekly based in Lagos.

In the interview, Mr Onyema expressed his ‘irritation’ about a perennial rumour that he had been fronting for Patience Jonathan in operating Air Peace, saying he had “never met” the former Nigerian First Lady in his life.

He said he grew up in Warri, but moved to Lagos shortly after graduating from the University of Ibadan and becoming a lawyer in 1989. When he moved to Lagos in 1990, he initially joined a law firm, where he worked for a few years before going into real estate.

It was in real estate that he said he became fortunate from selling lands in Lekki and other priced areas in the Nigerian commercial capital.

“By 2008, I was receiving about 18 per cent interest on my deposits. I was building estates from interest alone,” he told City People.

He said it was in 2008 that he discussed launching Air Peace with his wife, and getting a licence for the airline took several years with exhaustive efforts.

“I brought my finances into it (Air Peace) while getting support from the banks too,” Mr Onyema told the magazine.

“When I had gone halfway with the acquisition of my aircraft, I discovered that it was more than I thought. So I borrowed money from the banks.

“Fidelity Bank is there for anyone who cares to see. I pay the bank daily from sales. It is automatic,” Mr Onyema said.

Since then, Mr Onyema said Air Peace has become so successful that commercial banks can no longer pass on any opportunity to do business with it, even as he emphasised that the company was whole owned by him.

“I have integrity and every bank that knows my pedigree like Fidelity would readily do business with me,” Mr Onyema said. “I equally borrowed from Zenith but not as much as I did with Fidelity. This is how I set up my airline. For the record, I own Air Peace 100 per cent.”

In another interview with the Vanguard last October, Mr Onyema said Air Peace had a staff strength of 3,000, out of which about 2,000 are women. He spoke glowingly of the dedication of women on his staff, especially top officials like Ms Eghagha whose intelligence and energy he said keep the company flourishing.