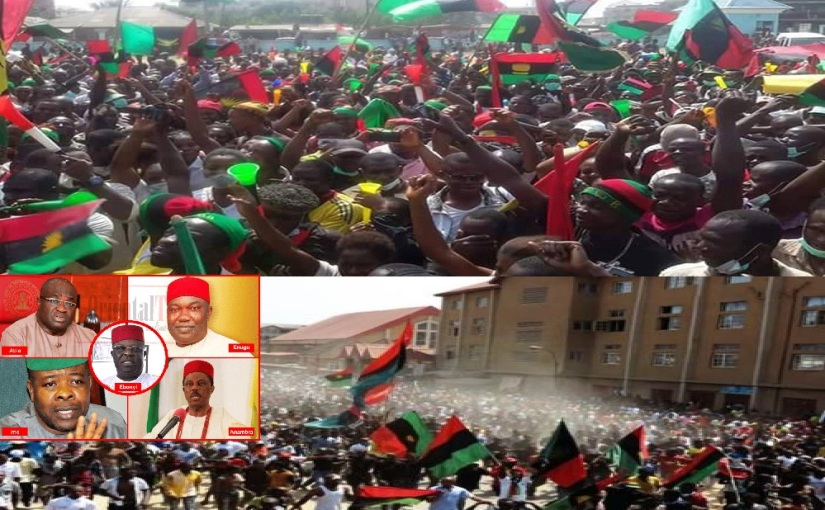 Since after the Nigerian second republic, unity and good governance have been eluding the Igbo nation, the Igbo land have gradually deteriorated into a sorry state, the crop of the so called leaders parading themselves in the Igbo space today is such that makes me shed tears.

Trending … Operation Positive Identification: Experimentation Of Martial Music & Imposition Of State Of Emergency By Other Means ….SBCHROs
Chi-Ukwu vs Chi, {God vs Personal god} Do The Igbo Worship Many gods?– {must read!!!}
The Concept Of Satan Or The Devil, How It All Began, Is Satan Actually An Enemy Of God? {must read!}

In October 2012 the then governor of Abia state Theodore Orji sacked about 4000 non Abia Indigenes who are also Igbos and most of whom were born and brought up in Abia state, from the state public service, without any monetary compensation, this act was carried out without regard to even those who have already served for more than thirty years, they were sacked without any terminal benefit, and some fell sick, some others lost their lives as a result.

The inferno at Ochanja market last month was possible as result of failure of Anambra state government and the neighboring states to provide governance, Onitsha one of the most densely populated city in Africa, a hub in Igbo land is without an effective functioning fire service,.. and someone will tell me their is a Governor in the state, okay! After the inferno any practical cushioning program? Waiting for answers!

The entire core Igbo land is without passable roads, the high ways are death traps, killing the people in their numbers, traveling from Onitsha to Enugwu takes the whole day, from Aba to Port Harcourt not passable, from Owerri to Onitsha have cut, Aba a city built by Dee Sam Mbakwe well planned with modern road network all tarred, the old Imo was the envy of the whole country, today Aba is just a refuse jump, the worst commercial city in Africa.

They have South East governors forum, Ohanaeze Ndigbo, and Igbo Intelligentsia what purpose are these forums serving? they will argue the roads are federal roads, but the roads are in Igbo region, are we to talk about insecurity? is it about prudent management of the state resources? they are busy creating all manner of taxes, even they are on the road they called federal road collecting taxes but cannot fix it, what crop of wicked leaders are these?

During the second republic Dr Nnamdi Azikiwe was able to unite the Igbos under NPP he provided leadership for the Igbo, and the Igbos came together under his leadership, voted in one pattern, that Azikiwe got 90% of Igbo vote in the election, the two Igbo states were swept by NPP, of the 59 federal seats in Igbo region NPP took 54, under Azikiwe led NPP Dee Sam Mbakwe performed wonders in the old Imo state, Jim Nwobodo equally did well in the old Anambra state, the Igbo was united, one block and spoke in one voice, and were taken serious in Nigeria.

Having studied the leadership the Igbo have had since 1999 it becomes evident that these so called leaders cannot change on their own, for there to be good governance in Igbo nation there must be a way to hold leaders to account.

IPOB is essentially a cry for equity and justice, Nigeria state is structured to favor one side of the country, with like policies to sustain it, the unfavorable policies against Igbo businesses, the discrimination, injustices, intimidation at some levels and places against the Igbo in Nigeria is a big factor slowing the pace of Igbo advancement, yes, but the disservice, wickedness, self-serving, incompetence, greed of the so called Igbo leaders is the main injustice, a greater evil against Igbo, the governors will pretend they re getting pea nut from the Federal yet cannot publish the figure for the people to know, they pretend the IGR is too small to even pay salaries yet nobody knows the figure, what is their various states work force? what is the state income? what is the budget everything is shrouded in secrecy, the money is the peoples money but is kept away from the people, the states in Igbo region is in a sorry state, the leaders of Igbo are the main people bringing hardship and suffering to the people not Nigeria government.

There are vital sectors of the Igbo economy e.g agriculture and manufacturing, no roads to our farms, no state loans for serious farmers and manufacturers, Nigeria government closed border against rice importation, good state governments should have seen it as opportunity to encourage farmers, provide soft loans for serious ones among them in turn generate revenue from there, if the state governments in Igbo region will look inward with the spirit of Igbo business men they will have so much to run the government with, what Ala-Igbo deserves is a transparent and accountable government.

IPOB is a powerful force on ground, have united the Igbos, well positioned, have the attitude, tenacity to confront these so called Igbo leaders to sit up and do the right thing, if IPOB can muster just half of the force they have been able to muster against Nigeria government, if IPOB conserves all these strengths and channel it more appropriately {which is against the Igbo leaders} things will change for good automatically.

Someone argued that if only a few billionaire Igbo men will pool their wealth together that a lot can be achieved and Igbo advanced, and I said good! But if only IPOB {a very powerful movement} will turn their attention towards the Governors, Senators and Reps in Igbo land, if Ala-Igbo is governed in the same manner an Igbo man does his personal business, Ala-Igbo will become the California of Africa.