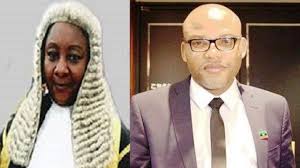 Recall that Kanu, who was based in London, UK, was arrested alongside three others on October 14, 2015, in Lagos. The federal government had charged him with treason but Binta Nyako, a judge of the federal high court in Abuja, on May 5, 2017, granted him bail after 18 months in detention on health grounds and adjourned the matter to November.

However, before the adjourned date arrived, Nigerian security forces and Kanu-led IPOB had engaged in various clashes, leading to the disappearance of the group’s leader in September, 2017, after an alleged attack by Nigeria soldiers at his family house in Abia State.

The Nigerian government labelled IPOB a terrorist organization, a tag the U.S, Germany and other countries flawed. The judge has since frowned at Kanu’s disappearance and blamed his sureties for Mr. Kanu jumping bail.

Later pictures of Kanu praying in Israel appeared on social media on October, 2018. The judge who ordered his re-arrested by revoking his bail, said the trial must continue whether he is present or not.

At the resumed hearing on Thursday, Ifeanyi Ejiofor, lawyer to kanu notified of his client’s intention to return back to the country for his trial.

Mr Ejiofor who said an application to that effect was filed in April and his ripe for hearing, urged the court to restore the revoked bail condition of the IPOB leader to enable him return to the country for the continuation of his trial.

The lawyer also said his client will return immediately if the court could guarantee his safety.

The presiding judge, Justice Nyako, said the court can only guarantee the safety of the IPOB leader if only he is kept in prison.

“Even judges are being abducted in the country. So prison is the only safest place for him,” she said.

Replying, Mr kanu, in turn recommended a prison for the judge and her family members since no where is safe any longer.

“According to Justice Binta Nyako, “Nigeria is NOT safe for anyone, including judges,” Mr kanu said in a tweet Friday afternoon.

“If in her view prison is the safest place to live for Nigerians, I suggest her family move into the nearest one to avoid being abducted. Nigeria is lawless, confirmed!” the secessionist leader added.