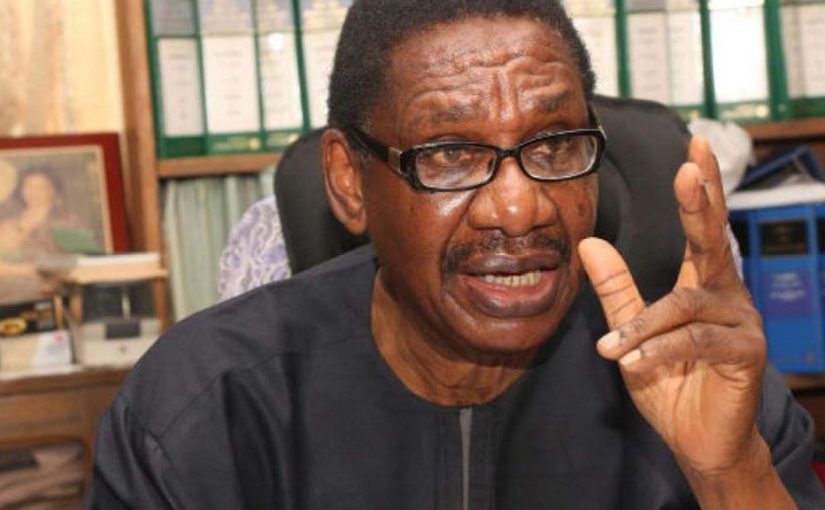 Professor of Law, Itse Sagay (SAN) has urged the All Progressives Congress (APC) legal team to apply to the Supreme Court for a review of its judgements on Zamfara and Rivers States.

According to him, the verdicts were a travesty of justice.

While the Supreme Court barred the APC from fielding candidates for the general elections, it nullified APC’s victory and declared Peoples Democratic Party (PDP) the winner.

A statement he issued on Thursday said: “The Zamfara and Rivers State judgements are a national tragedy. We should not allow our legal system to throw up such unimaginable injustice.

“This major judicial disenfranchisement of the Zamfara and Rivers electorate should be reversed. I advise the APC legal team to apply for a review of the two judgments.

“Their Lordships ought to be given an opportunity to reverse this unprecedented tragedy.

“The prefix ‘Justice’ preceding he names of Supreme Court and Court of Appeal Judges is significant, for it prescribes what they stand for and what they represent: Justice!

“By this judgment, the landslide APC victories in the governorship, Senate, House of Representative and State House of Assembly are transferred to the PDP.

“If the APC primaries were defective, should the electorate be deprived of their democratic and Constitutional rights to vote? Is the electorate to be punished for the transgressions of party officials?

“Should the Judiciary replace the electorate’s decision and install losers in office? Could the Judiciary not have drawn on the deep recesses of its intellectual capacity, authority and its inexorable commitment to justice, to prevent this undemocratic calamity?

“Can the APC officials not be punished, for their lapses without denying the electorate their democratic rights? Should the Judiciary take over the electoral rights of the electorate? Is this not a clear case of technical law completely overthrowing justice?

“Have the members of the Supreme Court not achieved a level of creativity and authority to provide a solution without burying democracy and taking over from the registered voters as the judicial electorate?

Sagay said the Supreme Court is specially endowed with the power and authority to do justice and to ignore law when it is technical and would create injustice, and to avoid at all cost a mechanical approach to the interpretation of the law.

“Now, has justice been served in Rivers and Zamfara states? No! In one case innocent electorate in their hundreds of thousands were prevented from voting for their party by judicial order.

“In Zamfara, where voting took place, the verdict of the electorate was taken away from the victorious party and awarded by the Judiciary to the woeful losers.

“In the next four years, Zamfara State will be governed by a party and politicians rejected by the electorate. This indeed shocks the conscience of Nigerian humanity.”

He also referred to Section 140(1) – (3) of the Electoral Act, which prohibits any court from declaring a loser of an election elected even if the person with the highest votes was not validly elected.

“No Judge should announce his judgment until he is satisfied that Justice has been served, no matter how strong the pull of mechanical and technical law,” Sagay added.