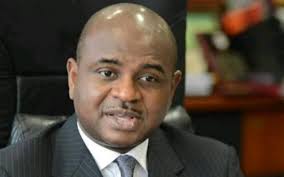 Kingsley Moghalu who reacted to the ongoing controversy sparked by the splitting of Kano emirate, stated that Governor Ganduje bastardised Sanusi’s throne to quash independent voice. The 2019 Presidential candidate who spoke at the Sikiru Kayode Adetona third annual professorial chair lecture, held on Friday at Ijebu-Ode, Ogun state, said traditional rulers ought to be selected by the citizens and not the governors.

“We have seen something happened recently in Kano state, that is the emir of Kano’s throne has been balkanised and bastardised. We know why; it is to quash an independent voice, so this raises the question of the roles of traditional rulers,” Moghalu said. The government should no longer appoint traditional rulers. Let the traditional rulers be selected by their community and recognised by the government. In a restructured Nigeria, with a new constitution, traditional rulers should have a formal role, that is, advisory roles. This is what we should do. We cannot make traditional rulers errand boys for politicians and when they refuse to play that role we begin to play around with them.”